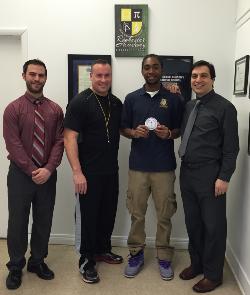 The Rochester Academy Boys Basketball Team is proud to announce that Captain Lakyll Hall was named 2015-2016 All-League Private Parochial All-Star.
Lakyll’s leadership and dedication was the drive force for our team through our 1st season of interscholastic athletics. Lakyll led the team with 176 points and was 2nd on the team with 75 rebounds, 26 assists and 34 steals. Lakyll also was named Jasper-Troutsburg Holiday Tournament Most Outstanding Player and was the team’s Most Valuable Player. Our coaching staff envisions carrying his accomplishments into his senior year with the support and contributions of senior classmen Kenan Abrams and Keith Montgomery.