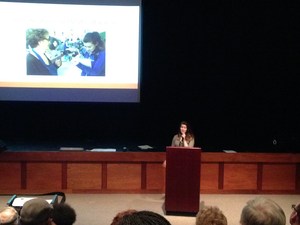 On March 20, our students presented their project during the Princeton Prize Race Relations competition.
Congratulations to Alyssa, Xiorelis, Nhandi and Khalil, for their hard work preparing and presenting their project at the Princeton Prize Race Relations competition at Allendale-Columbia School on March 20, 2017.
Led and mentored by Ms. Sirin, our students presented  new curriculum for a course they created called,  "Race Relations and Multiculturalism". Fourteen other schools competed in this event.
The mission of the Princeton Prize is “To promote harmony, respect, and understanding among people of different races by identifying and recognizing high school age students whose efforts have had a significant, positive effect on race relations in their schools or communities.” By recognizing, rewarding, and reinforcing the good work of students who are making a difference, the Princeton Prize hopes to promote better race relations now and to provide an impetus for other young people to work towards racial understanding in the future.